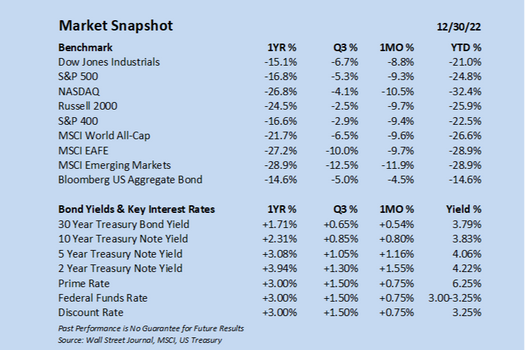 Stocks rose strongly in the Fourth Quarter,
ending a challenging 2022

Stocks posted strong gains in the Fourth Quarter and ended a three-quarter losing streak. However, with a rough ending in December, it seemed more like a consolation prize than a victory. Particularly considering for the year, stocks posted their worst losses since 2008. In a very challenging year, however, any forward progress is welcomed good news.

2022 was tumultuous and filled with challenges, as the Fed embarked on an aggressive and historic path of raising interest rates to fight 40-year high inflation, and Russia invaded and waged war on Ukraine causing commodity shocks and global outrage. The Fed raised policy interest rates seven times in 2022, for a total of 4.25%, mounting an aggressive reversal of the emergency Covid-19 pandemic policy response. As a result, bonds had their worst year in history with the Bloomberg Aggregate Bond index losing 13%.

As long-term investors seeking rewarding investment returns over the long-term, we are accustomed to volatility, which is ever present in the financial markets. What made 2022 an anomaly, was the extreme volatility in both stocks and bonds. As Capital Group notes below, it is rare for both stocks and bonds to post losses in the same year. In fact, over the past 45 years, the last time it happened was 1977. It was the worst year for a balanced 60-40 portfolio (60% stocks and 40% bonds) since 2008, and third worst since 1950, according to JPMorgan. Investors come to rely on their bond exposure to provide a ballast against stock volatility, and that relationship broke down in 2022. Going forward, we expect that relationship to be restored, as well as the long-term, historical attributes of diversification.

Powerful gains in October and November were enough for global stocks to absorb the rough ending to the year in December to post Q4 gains, ending a three-quarter losing streak. Nonetheless, global stocks posted double-digit losses for the year. Leading the charging in Q4 was the Dow Jones Industrial Average which gained 15.4% and the only US index to close the year out of correction territory at -8.8%. The mid-cap S&P 400 jumped 10.3% in Q4 to cut its loss for the year to -14.5%. The benchmark S&P 500 and small-cap Russell 2000 rose 7.1% and 5.8%, respectively, in Q4 and finished the year down 19.4% and 21.6%. The tech-heavy Nasdaq was the only major index that posted a loss in Q4, dipping 1%, and capped a challenging year for growth stocks in general as Nasdaq fell 33.1% in 2022, the worst since 2008.

Overseas, developed and emerging markets posted strong Q4 gains, boosted by the 7.9% decline in the US dollar. The benchmark MSCI EAFE index surged 17% and outperformed US stocks for the year finishing down 16.8% versus -19.4% for the S&P 500, and for the first time since 2017.  For the year, the US dollar rose 8%, and hit PAR with the Euro in July for the first time since 2002. Emerging markets gained 9.2% in Q4 but finished down 22.4% for the year. Economies overseas faced the same rising interest rate policies and even higher inflation than the US in many cases. China battled Covid-19 reopening challenges, which furthered supply-chain issues. Overall, supply-chain constraints improved throughout the year, and the cost of shipping containers declined as well, which have contributed to the second-half decline in inflation.

The Fed raised policy rates 0.50% in December at its last FOMC meeting of the year to the highest level in 15 years. It was the seventh rate hike for the year but ended four straight 0.75% hikes following the better-than-expected November CPI report at 7.1%. CPI peaked at 9.1% in June and has been declining since. The Producer Price Index rose a more-than-expected 0.3% in November and dampened market expectations of the Fed taking its foot off the brake early in 2023.  The Fed is implementing Quantitative Tightening (QT) which includes reducing its $8.5 trillion balance sheet.

The benchmark 10-year Treasury Note yield closed 2022 at 3.88%, up 2.36% for the year but off its October high of 4.25%. However, the yield curve closed the year remaining inverted with short-term interest rates higher than long-term, which has historically been a sign for a pending recession (but not always). At least two more rate hikes are expected in 2023 before the Fed pauses on its way to reaching its 2% inflation target goal. The market has been concerned the Fed will tighten too much in its efforts to vanquish inflation, thus slowing the economy beyond a soft landing/mild recession. The economy has remained resilient, growing an annualized 3.2% in Q3, after contracting in Q1 and Q2, and the unemployment rate has remained near 50-year lows at 3.5%. However, amid the Fed’s inflation fighting plans, the economy is expected to slow in 2023 and unemployment to rise.

We begin 2023 in a much different place than last year at this time, which lends to cautious optimism. Heading into 2022, both stocks and bonds were trading at high valuations, with stocks closing 2021 at all-time highs and bonds just off historic Covid-19 QE induced low yields, compressing their long-term forward return expectations. Following a year of extreme volatility and double-digit losses in both stocks and bonds, their valuations and forward return expectations are much more attractive. Historically, in years the market has had double-digit losses the following year has been overwhelmingly positive (see Dimensional-Stock Gains Can Add Up After Big Declines illustration below). Further, we are in the third year of a presidential term cycle, which also have been strong historically (Hartford Funds-2023 Could be a Good Year). Of course, past performance is no guarantee for future success.

Given the uncertainty surrounding the Fed’s aggressive rate hike policy to slow the economy and return inflation back to its 2% target, rising recession risks remain. Recessions are not kind to the financial markets; thus, caution is warranted. Though, at this juncture a soft-landing/mild recession remains the base case. Given foreign central banks are also raising interest rates and reversing emergency pandemic policies, foreign economies also face rising recession risks.

We are encouraged by the improved stock valuations and attractive yields offered by bonds for the long-term outlook. We had to endure a tough 2022 to get there. With the Fed uncertainty, volatility remains in the forecast and we urge investors to temper short-term return expectations against the historical precedents noted above. We anticipate a return of the virtues of diversification and the traditional risk relationship between stocks and bonds. Investors should remain resilient with their investment programs and continue to maintain a disciplined, long-term focus.

The market environment for 2023 remains challenging but we are cautiously optimistic, and continue to encourage investors:

Bonds should once again offer diversification from equities

As Capital Group notes: "2022 will go down in history as one of the worst periods for bond returns on record. Big losses have caused investors to question the long-held principle that bonds offer relative safety when stocks fall. Stocks and bonds rarely decline in tandem in a calendar year, and 2022 was the only exception in the 45-year period dating back to 1977."

However, there is optimism that the traditional diversification relationship between stocks and bonds returns in 2023, as the Fed winds down its aggressive Quantitative Tightening to fight inflation.

Sources: Capital Group, Bloomberg Index Services Ltd., MSCI. Returns above reflect annual total returns in USD for all years except 2022, which reflect the year-to-date total return for both indexes. As of 11/30/22. Past results are not predictive of results in future periods.

Stock Gains Can Add Up
After Big Declines

Our partners at Dimensional illustrate, that "while sudden market downturns can be unsettling, US equity returns have, on average, been positive, historically."
*Past performance is no guarantee of future success

The Secure Act 2.0 of 2022 is a sweeping bill signed into law that impacts all saving for retirement. From another raise in age to 73 for RMD requirements, to expanded Roth options for SIMPLE IRA and SEP IRA plans. Capital Group summarizes over 90 changes to qualified retirement plans and the timeline.

The market has been nervously discounting recession risk in 2023, largely due to aggressive interest rate hikes by the Fed to quash inflation. Capital Group provides valuable investor insight into recessions.