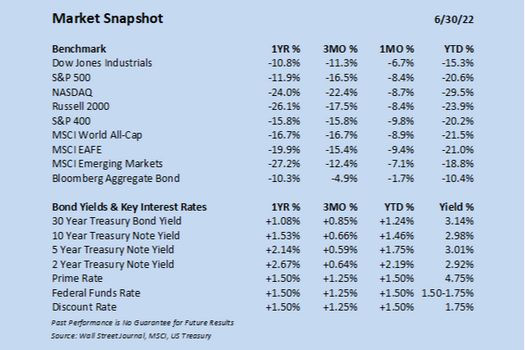 As we’ve seen many times over decades of investing, financial markets can present challenging investment environments, which at their extremes can test even the most seasoned investor’s resolve. The Second Quarter of 2022 was such a period and included the unnerving entrance of a bear market not seen since the beginning of the Covid-19 pandemic. Bear markets, which can vary in terms of duration and magnitude, are commonly defined as a market decline of 20% or more. While the cast of volatility catalysts remained the same as the First Quarter, the escalation of rising interest rates, both by the Fed and market rates, continued global supply chain constraints, rising inflation, and the continued horrific Russian war in Ukraine that has skyrocketed energy prices, have all raised the risk of recession in 2023, or potentially sooner. The culmination has the global markets recalibrating the risks to corporate earnings, as well as consumer and investor sentiment, and market valuations have been impacted.

As fiscal and monetary stimulus is normalizing from emergency accommodations, the economy is following suit and contracted 1.6% in Q1. Rising interest rates and inflation with higher prices for goods, services, energy, and food are contributing to the economic slowdown. Q2 GDP is expected to dip 1.5%, according to the Atlanta Fed’s GDPNow, which would technically be considered a recession with back-to-back negative quarters. However, with unemployment at 3.6% and continued strong jobs growth it may not meet the official designation as set by NBER at a later date. Time will tell, but nonetheless recession risk is rising especially with the Fed’s new stance of raising policy interest rates aggressively sooner to thwart high inflation, one of its two mandates. The degree of difficulty for an economic soft-landing by the Fed, raising interest rates to lower inflation to its 2% target without sending the economy into recession, has risen dramatically and has the market nervous. The Fed is willing to let unemployment rise from these pre-pandemic levels to keep inflation from becoming a long-term problem. It’s a tricky balance because maximum employment is its other mandate.

Overseas, markets and economies are dealing with the same high inflation and slowing economic growth challenges. The benchmark MSCI EAFE index fell 15.4% in Q2 closing the first half down 21% and in bear market territory. Emerging Markets lost 12.4% in Q2 and finished down 18.8% to close the first half.

Frustratingly for investors, from conservative to moderate-aggressive, with diversified portfolios that include bonds as a ballast against stock declines, volatility wasn’t dampened nearly as accustomed to traditionally. That’s because bond volatility was almost as high as stock volatility in the first half. In fact, bonds and rising interest rates were causing a lot of the volatility in stocks. The Bloomberg Aggregate Bond index lost 4.9% in Q2 and finished down 10.4% for the year. It was the worst half for bonds since 1994, when the bond benchmark index fell 2.9% for the year and the worst decline since 1976. Since 1976, the Bloomberg Aggregate Bond index has finished down for the year only four times. According to Morningstar, 2022 is only the second time in four decades that stocks and bonds have both posted losses for two consecutive quarters. The benchmark 10-year Treasury Note yield rose 0.66% in Q2 to close at 2.98%, but only after rising to 3.49% mid-June. The 10-year T-Note yield has risen 1.46% YTD and has led mortgage rates higher as well, with 30-year mortgage rates closing Q2 at 5.70%, up from 4.67% ending Q1. Cooling off the hot home and rent markets is part of the Fed’s inflation fighting plans. The Fed is expected to raise policy rates at least another 0.75% at its July FOMC meeting, and at least 0.50% at each of the remaining three meetings in 2022.

Our Outlook is cautiously optimistic for a better second half of 2022 than the first. However, that is a pretty low bar given the first half ended in a bear market, which has happened only four other times in history, as measured by the S&P 500. Further, a better second half could simply be positive returns or less worse losses. Historically, following bear market declines of 20% in the first half for the S&P 500, which has only occurred four times, the following six months have been positive each time and up over 20% the next 12 months (Morningstar Direct), though conditions varied and past performance is no guarantee for future results. As our friends at Capital Group have reminded us, missing just a few of the market's best days in a market recovery can be devastating on your long-term returns.

We urge investors not to expect a v-shaped recovery like in 2020, which will require discipline and patience, when historic government fiscal and Fed monetary policy as well as global vaccination success spurred the fastest bear market and economic recession recovery in history from the Covid-19 pandemic. That support, however, is currently being unwound towards normalization and to combat inflation.

Volatility remains in the forecast for the foreseeable future as the many market moving variables that impacted the first half persist. Nonetheless, we remain steadfast in our long-term focus and urge the same for investors, employing discipline and patience with their investment portfolios during these challenging times. It is important for investors to be looking forward not backward.

Hartford Funds illustrate "Inflation and Volatility" and the risks of being wary. Anxious investors could miss out when trying to avoid turbulent markets.

Invest with a Long-Term Focus

Capital Group emphasizes the importance of investing for the long-term in a short-term world by focusing on "time in the market" rather than "timing the market."