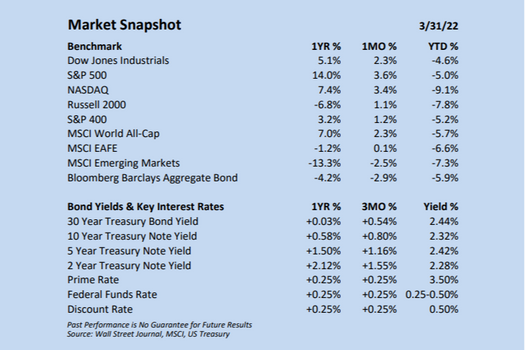 Russia’s war on Ukraine, high inflation, and the Fed
led to rough First Quarter for both stocks and bonds

The First Quarter of 2022 was not short of market moving headlines. Russia’s unprovoked invasion of Ukraine in late February sent shockwaves around the globe, unifying and further strengthening NATO in response with widespread condemnation. Additionally, crippling economic sanctions on Russia by the US and other NATO allies also impacted global financial markets. Combined with escalating inflation, and the Federal Reserve’s more aggressive interest rate policy plans, it was a lot for markets to digest and proved to spark volatility in both the stock and bond markets across the globe. It was the first quarterly loss for stocks since Q1-2020 at the beginning of the Covid-19 pandemic.

The tech-heavy and more interest-rate sensitive Nasdaq Composite fared the worst of the major US indexes, posting a loss of 9.1%, but well off the low of 18.2% in early March. Small-caps, as measured by the Russell 2000 fell 7.8%, while the mid-cap S&P 400 slipped 5.2%. The benchmark S&P 500 lost 5.0%. while the Dow Jones Industrials dipped 4.6%. Each of the major US indexes hit correction territory of 10%+ in early March, shortly after Russia’s invasion of Ukraine as tensions across the globe escalated, before rallying towards quarter end.

Foreign markets also fell in the First Quarter amid the global outrage of Russia’s war on Ukraine, sounding the most harrowing echoes of war in eastern Europe since World War II.  Rising inflation has been a global event and has impacted foreign markets as well. The benchmark MSCI EAFE index fell 6.6% in Q1, while emerging markets lost 7.3%, each of which also hit correction territory in early March. MSCI and Russell FTSE have removed Russia from their Emerging Markets Indexes, deeming it uninvestable.

The Federal Reserve and sharply rising interest rates were also center stage in Q1 as inflation soared. The Fed pivoted on inflation in late November, when it retired “transitory” from its inflation language. That set the stage for rising interest policy for 2022. However, as inflation continued to escalate in Q1, to levels not seen since 1980, the Fed’s tone became more aggressive in its guidance. March CPI (consumer price index) jumped to 8.5% for the trailing 12 months (BLS). While the Fed raised the Federal Funds rate 0.25% as widely expected at its March FOMC meeting, comments suggest it was cautionary amid the Russia invasion of Ukraine and otherwise would have been 0.50%. Markets are pricing in 7 to 9 rate hikes of 0.25% by year end; however, we are likely to see 0.50% hikes in May and June to pull forward some of the tightening. The benchmark 10-year Treasury yield jumped 0.80% to close at 2.32% in Q1. Mortgage rates jumped as well with the 30-year mortgage rate rising 1.38% to 4.67% (St. Louis Fed). The widely watched 2-year and 10-year Treasury Note yield spreads, among others, inverted in Q1. Yield curve inversions have historically been a forecaster of recessions, though not always accurate. Recession risk remains low for 2022 but rising for 2023. Bonds experienced nearly as much volatility as stocks, with the benchmark Bloomberg Barclays Aggregate Bond index falling 5.9% in Q1, and corporate bonds sinking 7.7%.

Many market moving variables persist, and volatility remains in the forecast for the foreseeable future as the horrific war in Ukraine persists, inflation remains elevated, and the Fed implements its intended aggressive inflation fighting monetary policy. High inflation is a global event, not just in the US and interest rates have risen globally as well. Europe’s economy is particularly tied to Russian oil and natural gas imports, though the EU plans to reduce dependence by two-thirds this year (Washington Post). Not only did the price of oil spike above $115/barrel following Russia’s invasion of Ukraine, oil was already on the rise amid strong demand from pandemic recovering global economies. US WTIC crude oil settled at $100.28 ending Q1. On 3/31/22, the White House announced 1 million barrels of oil will be released daily from Strategic Petroleum Reserves over the next six months to help with tight supplies and sanctions. Earlier in March, the US and 30 other countries committed to releasing 60 million barrels from strategic petroleum reserves. The Bank of England (ECB) was the first central bank to raise rates toward normalization in December 2021 and raised rates twice in Q1. The ECB will stop bond purchases by the end of Q3 to set the stage for rate hikes potentially later this year.

The concerning spike in Covid-19 Omicron cases waned over Q1 and many state mask mandates were relaxed, providing further progress toward normalization, coupled with vaccination and booster success.

We urge investors to remain disciplined and patient with their investment portfolios during these challenging times.

Timing the Market is Impossible

Hartford Funds illustrates "In times of volatility, timing the market may seem tempting. But doing so is impossible and may be a costly mistake."

Mid-Term elections are coming this November, and this piece from Capital Group explores whether Mid-Term Elections can Move Markets, with 5 charts for investors to watch.

Managing the Ups and Downs